So it’s suddenly become real, this trip to Tokyo, New Zealand and San Francisco. It was just a figment of my imagination as far as I was concerned, until I stepped onto the plane. It’s real. And to be honest, it’s not the easiest thing I’ve ever done. I’ve spent a fair amount of time researching things to do, planning activities, booking hotels, organising. But it never seemed real, this trip.

And it’s not just a trip. It’s not just a trip around the world, or a trip to my stepbrother’s wedding. It’s also a trip to find me. Ok, that may sound weird. But it’s about proving to myself that I CAN do it. That I CAN get lost in a foreign city and not have a meltdown about it, that I CAN quite easily not have that familiar feeling of panic when the flight takes off. I have to be able to deal with these things, and I do that by putting myself in the thick of it. Four long haul flights and two internal flights is no mean feat for someone who isn’t that keen on flying. And I have no-one here to settle my nerves during bouts of flight turbulence. I have to be find the person in me that can deal with these things. So it’s much much more than just an exciting, if scary at the moment, trip.

So far so good. 800 page book to read, rubbish films to watch, airline food to be eaten (actually the chicken teriyaki was quite delicious!), and sleep to be had because although this is a day flight, I arrive in Tokyo at 7:30am which means no time to sleep as I want to discover the city and not waste a precious day sleeping.

Update: now had my first day in Tokyo, so will pick up the story here 🙂

I couldn’t sleep on the plane despite trying, and I get bored very quickly 😂 I even listened to a meditative hour long “deep sleep on a plane” podcast type thing, twice. Even two rubbish films didn’t do it. Which is why I’m sitting here at 2am wide awake.

So, first day in Tokyo. What can I say. For the little I’ve see, this place has blown me away already. I was headed for disappointment before arrival though. I had booked a window seat in the hope of seeing Mount Fuji on the descent, but I was on the wrong side of the plane!! The pilot announced that the other side of the plane had a fantastic view of it on a clear sunny day, but at this point we were all strapped into our seat belts so I couldn’t see! Anyway, we had to circle, so I got the most amazing view of it, although the pics I have of it are a bit rubbish!

The next thing about Tokyo is the landing. It’s like you’re about to land on water. I didn’t really look st where the airport is situated. You get to about 50 feet and all you can see out the window is water. In my head I was thinking why hasn’t the pilot advised us to get ready for a water landing 🙄 at the final moment you then see land beneath you! Bit scary for someone who’s not that keen on flying!! I then had to navigate the monorail (again you are moving above water), the metro and then find my hotel. Anyone who knows me, knows that I get so lost all the time, so this was a bit of a worry to me, but it wasn’t that bad. It’s logical. Ticket machines are beside the monorail signs, then it’s a ticket gate much the same as London Underground. Metro trains were busy (it was rush hour) and I witnessed the “pusher inners” – the guards that push as much people into the train as possible. Not good when you have a massive suitcase (half empty tho ;))
The monorail is a Greta way to get from the airport to Tokyo, it gives you your first glimpse of the city and also starts to get you sued to not seeing that many non-Japanese people around. I was the only non-Japanese person on that monorail and then the metro train. It felt a bit weird. And it made me question what I was doing. A big big city, no familiar phases, no familiar language.  The Japanese are polite though, which is lovely. And helpful. Although not in the metro while I was lugging the suitcase nearly as big as me down and up stairs!

Anyway, couldn’t check into my hotel until 3pm, I arrived at 7am. So dumped my suitcase and went for a wander. My hotel is in the red light district. It’s not that bad. Lively and full of bright lights, neon signs flashing everywhere and loudspeakers rigged to the telegraph poles with loud Japanese booming out to try and entrance you into various establishments.

I went to the Metropolitan Government building as they have two towers both with a viewing deck on the 45th floor. And it’s free. The sky tower and the sky tree both charge a fee and I will visit them, but I wanted to also go to this one as the guide book said you get a good view of Mount Fuji (which I now seem to be obsessed with!) on a clear day. The guys in the building are all uniformed, smart and very traditional. On bag checking, I handed over my bag but they won’t check it until you have opened it for them, otherwise it’s seen as an invasion of privacy. Weird little things like that I’m beginning to see a fair bit.

Got to floor 45 and the lookout points didn’t disappoint. Not only was Mount Fuji right there, you can see the scale and sheer size of Tokyo. My photos don’t do it justice, it is bloody huge!!! Amazing to just stand and look out over such a metropolis. Great free place to go for the views. 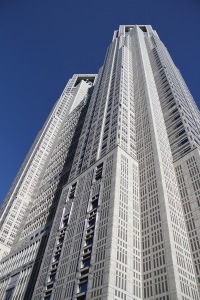 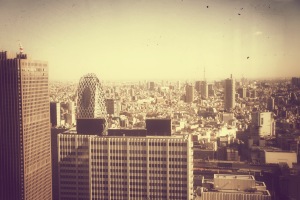 I then decided to go to Shinjuku Gyoen. A calm oasis in a city of craziness. A beautiful park even in winter. It was easy to see how this park would look in the height of cherry blossom season. Stunning. Two tea houses and small bridges over the various small lakes of water, it really is a tranquil place to get away from those annoying sights and sounds of the kabuchiko area. Tomorrow I’m going to a different area, to see some temples and shrines, to carry on with the chilled out feeling. Now I must try and get back to sleep as it’s 3am and I’ve forgotten to mention the toilets here, the size of hotel rooms and various other things, but I will come back to them… and Godzilla. 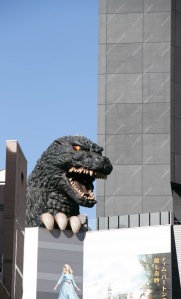